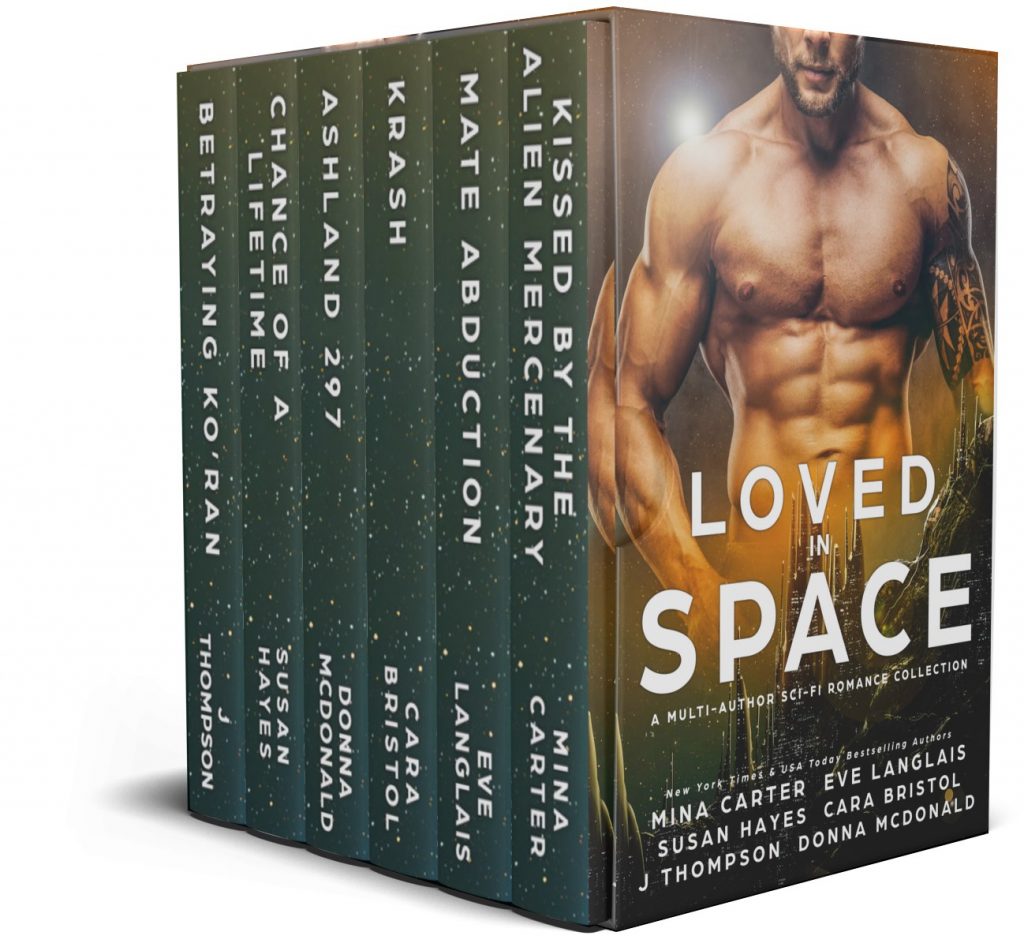 Kissed by the Alien Mercenary: Warriors of the Lathar by Mina Carter

Woken by a kiss, she didn’t expect her prince to be a handsome alien warrior.

After being ill for months Lizzie Kalson wakes to a world she doesn’t recognize. Literally. That’s because it’s the home planet for an alien empire. Now she has to contend with the fact her sister is an alien princess and the hot as hell alien warrior whose deep, gravelly voice haunts her dreams. She should keep a level head but something about him makes her want to forget all about the differences between their species and wish for her own fairytale romance...

Born with nothing, his honor is all he has. And he’d leave it all behind because of love...

Saal has always had to fight for everything he has, including his place at the Healer’s Hall. Seen as a punishment by most, he doesn’t care. Not when it allows him to be close to the beautiful Lady Lizzie.

He’s determined to make her his, but the cost is higher than he expected when cultural differences raise their ugly heads. Perhaps humans and lathar don’t get a happily ever after…But when Lizzie’s life is on the line, can Saal look past his heartbreak and save the only female he’s ever loved?

When a dating agency claims to match Earth women with extraterrestrials, fraud investigator Cyan Blue goes undercover as a client to expose the scam. She’s not interested in finding love and certainly not with a pretend alien!

With their planet suffering a critical lack of females, Dakonian men begin emigrating to Earth in search of mates. Concerned about the impact of the mass exodus, Krash joins a dating agency to gain passage to Earth so he can convince his fellow Dakonians to return home. As soon as he completes his assignment, he’s going back to Dakon. The last thing he desires is to mate with a human.

Two missions are about to collide in a perfect match.

Chance of a Lifetime by Susan Hayes

No risk. No reward.

Erik O’Neill has finally stopped looking for trouble. Now, trouble’s come looking for him. After years of cage fighting, Erik is ready to step away from the Nova Club’s fight ring and into a new role – security for the club he calls home. All his plans change when a lovely loner starts visiting the club, and he finds himself caught between the need to safeguard his home and his friends and his desire to protect the woman laying claim to his heart.

Chance is a cyborg with a secret. If the wrong people find her, she’ll lose her shot at having the life she dreams of – or any life at all. She’s come to the Drift looking for allies, but when she meets Erik, she discovers he can offer her more than safety. He’s her chance at happiness, too. When time runs out, she’ll have to make a choice that will change her life forever - keep running, or turn to the one man her heart tells her she can trust.

On a quest to find a human colony, Clarabelle is taken prisoner by a dude who insists she’s his mate. Ha. As if she’s going to settle down. Clarabelle isn’t about to take orders from anyone. Not even the alien hottie who has a disturbing tendency of shifting into a giant lizardman. Her idea of a happily ever after doesn’t include a tail or glowing yellow eyes.

What will it take for her to accept his love and become his fated mate?

Betrayal comes in many forms.

Ko’ran Edwards, Commander of Terra One, is carrying the fate of his entire race on his weary shoulders. Wounded and betrayed, his home destroyed, he needs to find a way off the planet and back to what’s left of his people, and to do it, he’s going to need the help of an unexpected—and utterly captivating—human woman.

Bethany Walker lost everything the day she watched her husband die: the love of her life, a career she adored, and any hope for her future. Trapped in a bitter cycle of loneliness and grief, the arrival of a gorgeous cyborg with a familiar face changes everything.

The last World War ended a decade ago but Dia’s love for the man she married goes on. Global hero and Astronaut Diana Daniels still searches for her missing cyborg husband.

What’s she supposed to do when she finds an alien instead?